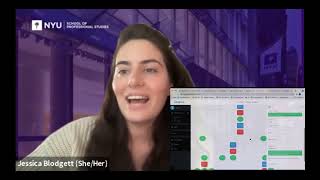 AI in HR on Mars! Recently, Francesco Rulli, CEO of Querlo, talked with Jessica Blodgett, Global People and Culture Manager at a non-profit called Global Citizen and recent Master’s of Science Graduate in Human Capital Analytics and Technology at NYU. They had an interesting conversation about AI in HR and a graduate project Blodgett had just completed with her degree.

Blodgett and Rulli briefly cover Blodgett’s work at Global Citizen, a non-profit organization headquartered in New York City; the company is beginning to adapt towards artificial intelligence, so most work at the company is still fulfilled manually. Blodgett wants to take the perspective she’s gained from her recently completed program at NYU and help them into the 21st century.

Quickly, the conversation moves to Blodgett’s final project as a Human Capital Analytics and Technology graduate student. The class was tasked with handling moving 400 of Futureco – a fictional company – employees to Mars to establish and colonize. Blodgett’s group – her, Ahmet and Brock – set out to tackle the assignment of streamlining the company’s Onboarding Process and Performance Management Experience. She marvels at how one does not need to be a “stone-cold coder” to create an advanced chatbot via Querlo; she also details how she took lead on the project as she had attended a Querlo workshop coordinated by Dr. Lupashor – the program’s professor – and Rulli.

Blodgett utilized her prior experience with building chatbots to build one with features that created a personalized user experience. She clearly outlines three specific features she was able to include. First, the chatbot included a feature that enables it to ask then store the user’s name in a variable. From then on, the chatbot is able to refer to the person it’s interacting with by name, creating a connection.

Secondly, Blodgett is excited about the sentiment analysis piece of the chatbot; the chatbot would follow asking the user’s name by asking, “How are you feeling today, [user name]?” Then, using Querlo’s built in sentiment analysis, Blodgett and her team were able to incorporate three different possible tracks in the chatbot’s backend. The chatbot directs the user down the neutral/good response path if they respond positively or neutrally. However, if they respond negatively, they are provided the option to speak to a person directly, assisting in Onboarding.

To conclude this interesting discussion of artificial intelligence, Rulli provides some extremely interesting facts regarding the MichelangeloAI product that Querlo has developed over the past few years. Michelangelo is not deterministic and instead utilizes NLU/sentiment analysis, has collected data from over 20,000 responses and now has a knowledge base of around 400 intents. Before leaving, Blodgett actually gives Rulli a demo of the chatbot that she built; to demonstrate the sentiment analysis, she provides a negative response and the chatbots replies saying “What can I do to help?” and gives the option to speak to a representative, as advertised!